The previous article was dedicated to the historical background of ŠRDN – From Bronze and Darkness – novel published by Acheron Books. We have talked about the nuraghes, the megalithic stone towers built in Sardinia by the Nuragic Civilization during the Bronze Age. I mentioned they are not the only astonishing megalithic monuments on the island. Today I’m going to talk about some of the others. 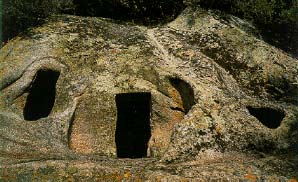 Domus de Janas: literally “Fairies’ houses”. The Domus de Janas are the Neolithic heritage of the island. They are ipogeic tombs excavated in the deep of rocky underground and they were built thousands years before the nuraghes. Sardinia counts about two thousand of them, in simple or rather complex structures, and they still largely remain a mystery. Considering the prehistoric period, the biggest lack of knowledge concerns the construction method: the Domus are chambers hand-carved in limestone and trachyte, but sometimes they are linked in real underground dungeons made of dozens of tombs, like in the necropolis of Sant’Andrea Priu.

The Domus had a funerary use strongly connected to the religious view of continuity between temporal life and afterlife, most likely dedicated to The Goddess: the Mediterranean Mother. If for some researchers the Domus reproduce the structures of village sheds, for others they symbolically represent an uterus, where the corpses were laid in a foetal position together with weapons and utensils, ready to be born again. Most likely, they worked more as ossuary, with corpses left outside to have their flesh stripped by birds and be carried inside only after. For local folklore, the Domus have always been considered the houses of fairy witches. And you know, that’s true. 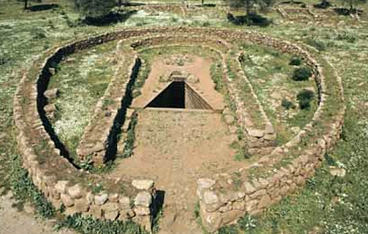 Holy wells: Sardinia counts about forty of them and they are probably the most complex architectures of ancient Western Mediterranean area. They were built mostly in the late Bronze Age together with the most composite nuraghes. The wells have a “truncated cone” underground structure (like a reversed nuraghe, but underground), accessible through a stair. This, from ground level, descends towards the centre for five or six meters of depth until it reaches a pool of spring or rainwater. The ceiling just above the pool usually contains a light-hole. It is astonishing to see how the carved basalt boulders composing walls and steps are perfectly smoothed (on the contrary of those of the nuraghes). The wells were used for water-related rituals, dedicated to The Goddess or to “Maimone”, another major spiritual entity you’ll meet on the novel. In the island, the best-conserved structure is the well of Santa Cristina (later Christianised name), which – more than others – shows the building’s astronomical alignments. The moon, every eighteen and a half years, shines through the ceiling hole and lights the pool, so as the sun does through the stairs every equinox. 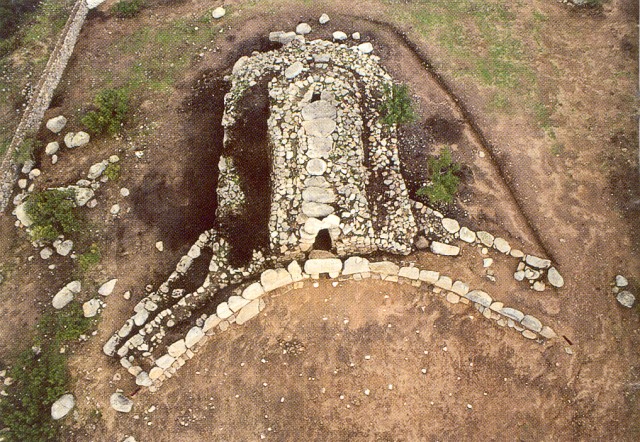 Tombs of the giants: theyareanothermysteriouskind of tombs of ancient Sardinia. They were traditionally called as such not for their size but because of the bone rests found inside, which in folklore were thought be the reminders of orks’ meals. The tombs are Nuragic graves of chiefs or whole families, more likely ossuaries, and probably dedicated to The God, bull-shaped male entity, to which the very structure of the building was devoted: the front part is usually half-moon shaped, resembling horns at the centre of which a massive stele dominates the entrance. It is fascinating to notice that Nuragicreligion was very far from polytheism – as common among the other major contemporary civilizations – but rather oriented to a dual cult towards the female and male essence of nature, very close to the believes that European “pagans” will develop in much later stages. In Sardinia, this aspect represented a perfect ground to introduce the Christian trinity and the cult of Mary. 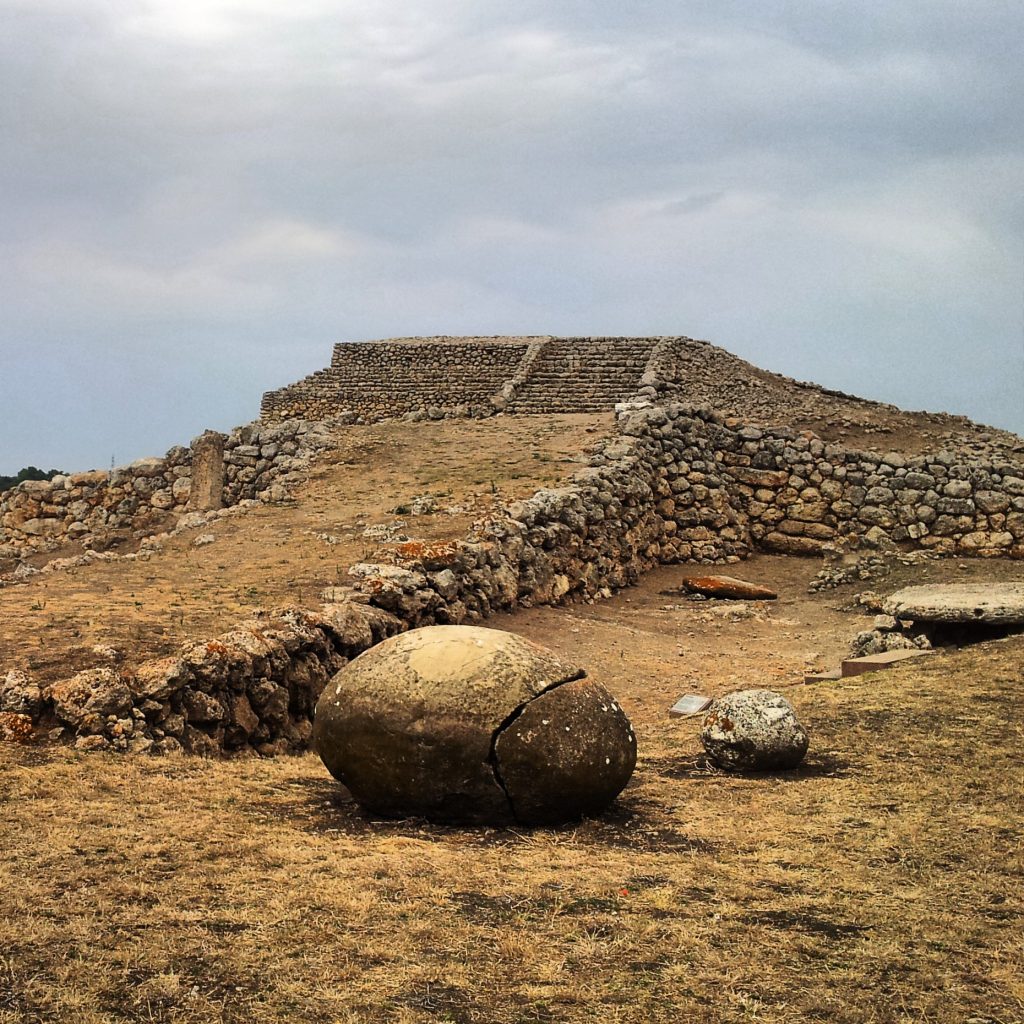 The temple of “Monte d’Accoddi”: Sardiniahoststhe only pyramid of the Western Mediterranean and the only ziggurat of the whole Mediterranean Sea. It was built about one thousand six hundred years before the nuraghes(and their Civilization) and it is one of the most bewildering temples of the island. It consists of three levels over a thirty per thirty-eight meters structure with a forty meters long flight to reach the top. Up there lie the rests of a shed and, at bottom of the stair, lies a sacrificial stone. The temple stands out from the flat horizon of the countryside and all the findings substantiate the possibility that it was the site of an oracle. Monte d’Accoddi is unique, and the mystery of its edification grows thick if we think about its resemblance with the “Anu” ziggurat of the Sumerian city of Uruk.

We stop here, but we get closer to the question: who really were ancient Sardinians? 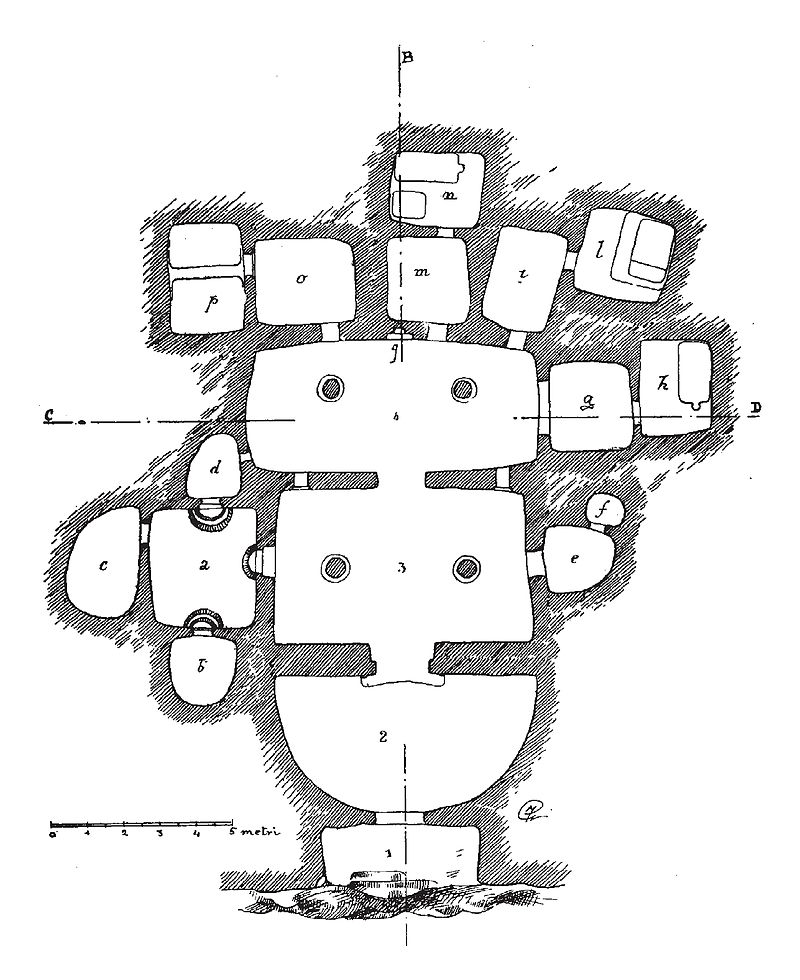